Alright guys, I promise – this is the last part of the story of my best marathon yet!

After the split, things feel pretty desolate for a while on the course, but this year wasn’t so bad. I had quite a few marathoners in my sights, and the girl that had commented “I wish they’d quit saying that!” kept piggy-backing me (we were both doing run/walk intervals). It seemed like there were more volunteers in this part of the course this year and I didn’t get that feeling of “Am I going the right way?”

Then something happened that had never happened in previous years. I was completely unaware of the time of day, so I had thought that the U.S. Only half marathon had already started and I was going to catch up to them. But for the first time, they caught up to me! At about mile 15 or 16, I heard a motor and saw cyclists, and a guy announced with a loudspeaker than the half marathon leaders were coming through. It was so cool to cheer on the leaders of the race and then before I knew it, I was in a crowd of people again.

Indian Village as always was a huge source of support. Several of the U.S. only half marathoners turned around to offer me encouragement and the spectators cheered loudly. This year I ran “through the wall” for the first time. I was feeling really good, although I knew that all of that could change on Belle Isle. My pace had picked up… miles 14-18 were 12:41-13:10. My average mile pace on my watch still read under 13 minutes. And I still felt good. 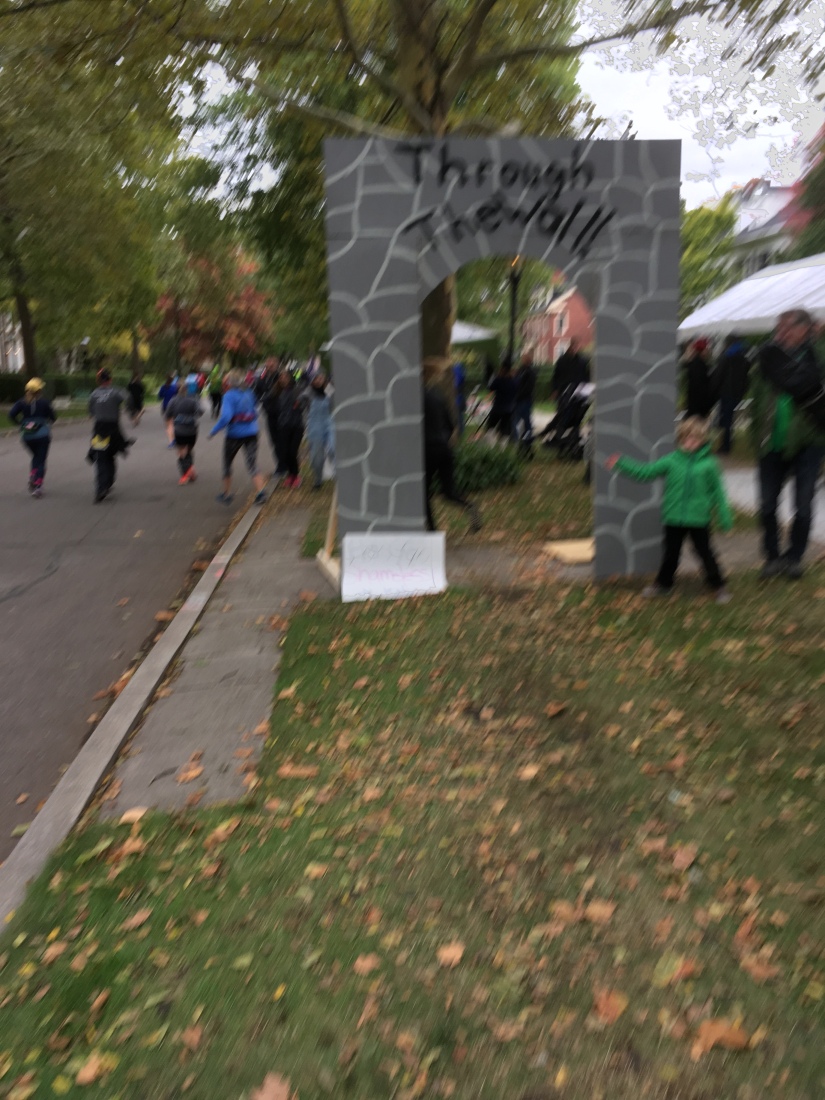 I approached mile 19 which is just before you make the turn to go onto Belle Isle. The past two years this part of the race has been the most challenging for me. Even in my marathon at Glass City, I started to fall apart around this time in the race. This year was a different story. For the first time, I really enjoyed Belle Isle. On the bridge I heard a girl say to her friend, “These marathoners must think we are a-holes, running by them so easily.” I said “Yeah, you guys are a-holes!” And they laughed. I followed it up with, “Actually you don’t know how inspiring you are. You guys keep us going. We don’t feel alone.” The girl asked me how I was feeling and I said, “Well I haven’t stopped smiling so I guess I’m doing pretty good!” 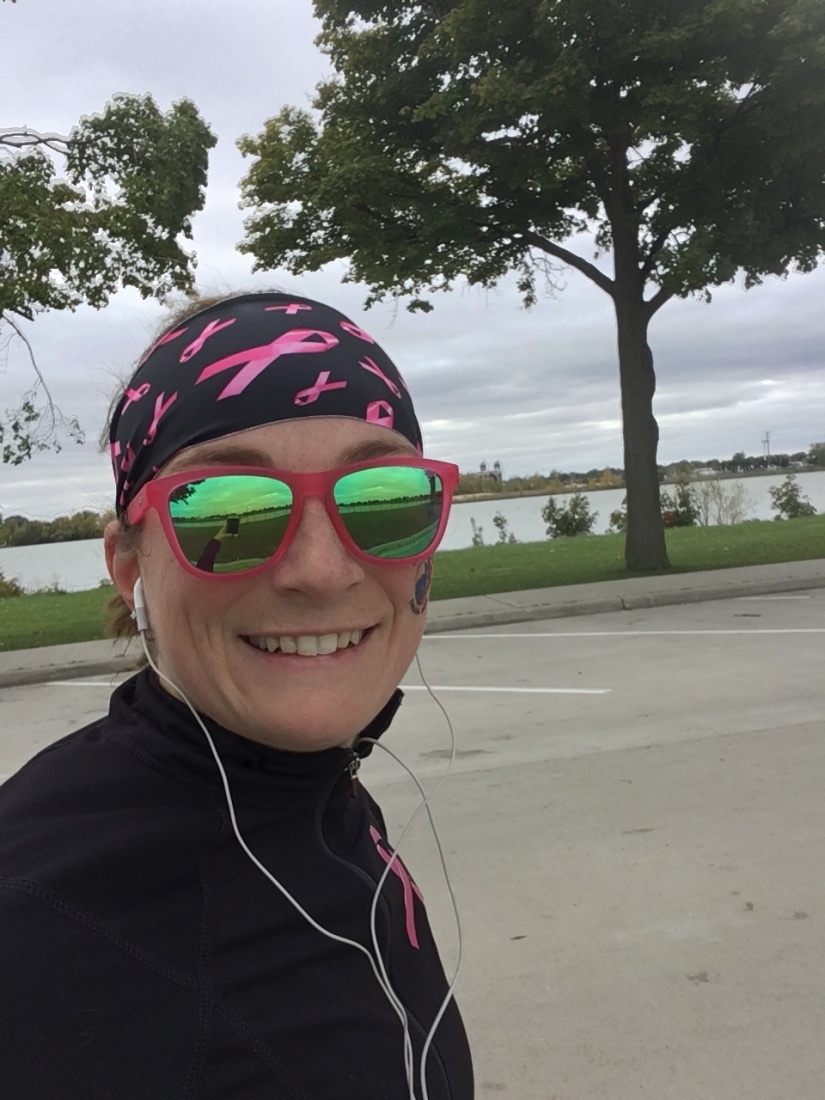 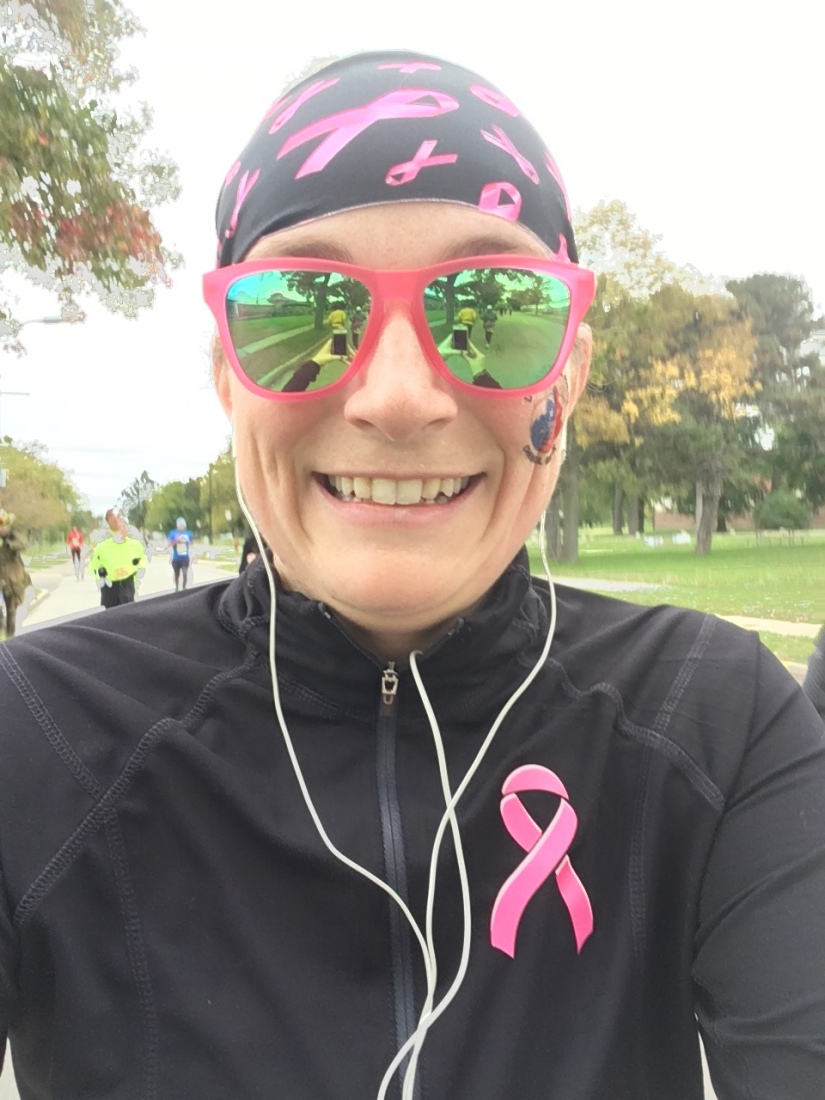 As I ran through, I thought about the past marathons, but I especially thought about my friend Paula and her first olympic triathlon on Belle Isle last month. I talked to a few other runners and kept pushing on. As I ran over the MacArthur bridge to leave Belle Isle I cheered for the marathoners that I saw on the other side. I hit mile 23 just after Belle Isle and let Ken and Christine know where I was. Christine said “Just a little more than a 5k to go!” and I kept going. My pace was still consistent – 12:25-13:12 per mile.

We turned onto the riverwalk, which was much more pleasant than last year. Last year the winds were so gusty that there were white caps on the river! I still had plenty of people with me… half and full marathoners. I texted Christine and Ken and told them I was HUNGRY and ready to eat! My last Gu was after mile 24 because once again I had to wait for a fluid station, and I savored that last delicious birthday cake gel. Mile 25 greets you with a lovely hill that feels like a mountain before you make your turn to head back towards Fort street.

Memories from my first marathon started hitting me as I made the final stretch. I remembered Staci seeing her kids near one of the restaurants and us breaking down into tears. As we went under an overpass, she started to get cramps in her legs. We were so close and we had to finish. I thought of all that we overcame that first marathon, and just then the song “In the House of Stone and Light” came on my iPod. I had left this song on my iPod from last year’s marathon because when I hear it, it makes me think of my husband. Not long after that came on I was approaching the final turn and I could hear the music playing for my finish…

“No freaking way,” I thought as I started to recognize the song. I ripped my earbuds out of my ears and realized that “Viva la Vida” by Coldplay was playing and instantly tears brimmed in my eyes. This was the song that played as Staci and I crossed the finish line in 2016. I was going to finish my fourth and best marathon to the same song that I finished my first! This put some serious boost in my pace and I took off towards that finish line, ignoring the run/walk intervals. I was running it home! 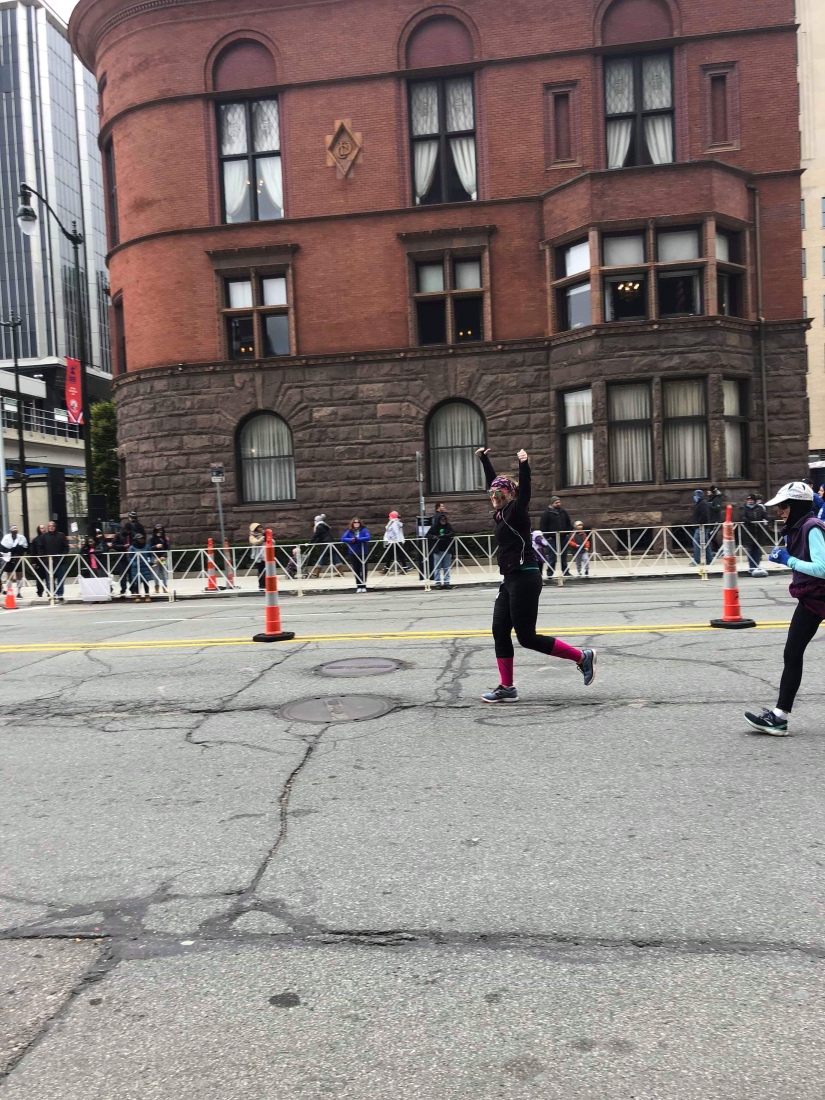 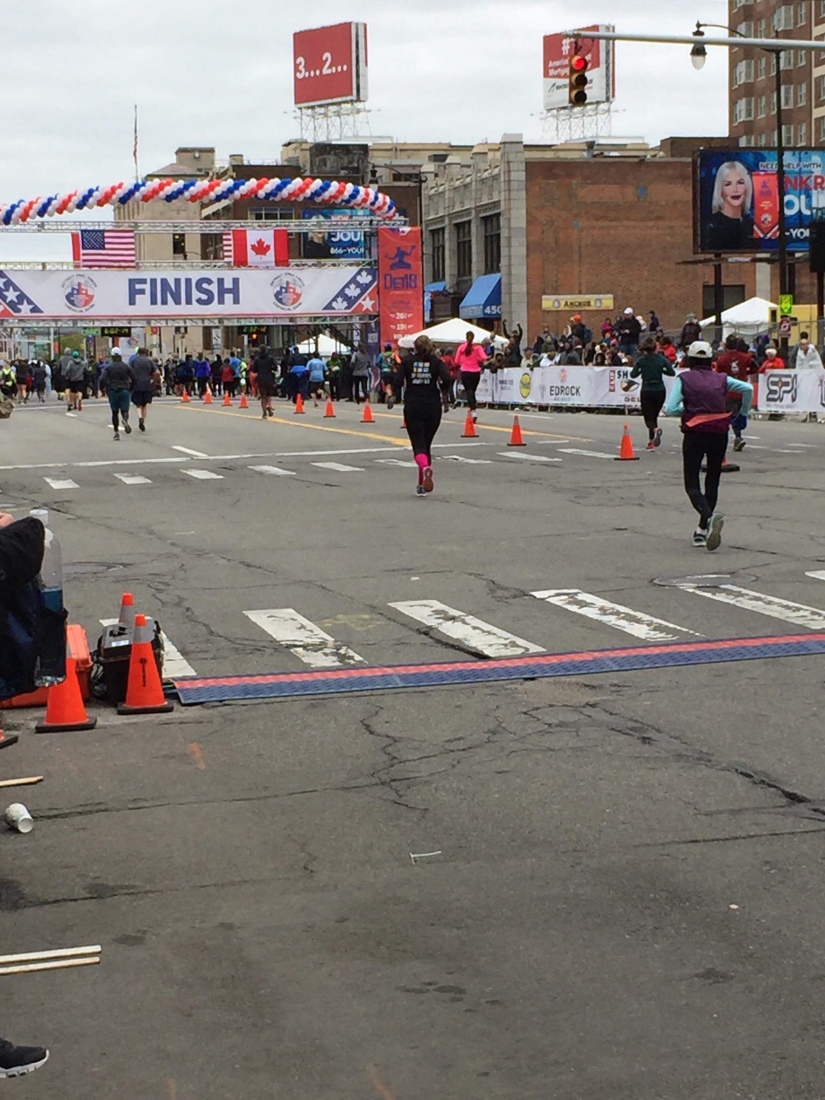 I saw Christine and Paula and threw my hands up in the air, huge smile on my face. I crossed the finish line and heard them announce my name just after the song stopped playing. I waited until I got through and smiled for the cameras before I stopped my watch. I looked down and saw “5:40:47” – holy crap.

I didn’t just get a course PR. I didn’t just get an overall PR. I beat ALL of my goals. I kept to my intervals. I kept a consistent pace. I never gave up or took a break. I took a few selfies, but I didn’t sacrifice pace to stop for a picture. I didn’t even take a bathroom break. Everything came together that day. The miles and miles of training in the hot, humid summer months. The rest, recuperation and good nutrition of race week. The weather – oh man, FINALLY the weather! My miles were so consistent, and I managed to pull off a faster second half than first half. I freakin’ did it.

After the race we made our way back to our hotel to get our stuff and our car and we headed to Paula’s where I took a much needed shower. Then we headed to Clubhouse BFD, the place that we went after my first marathon, and I enjoyed almost the same meal (a slightly different beer selection). It was the perfect cap to an amazing race to end a tough training cycle. 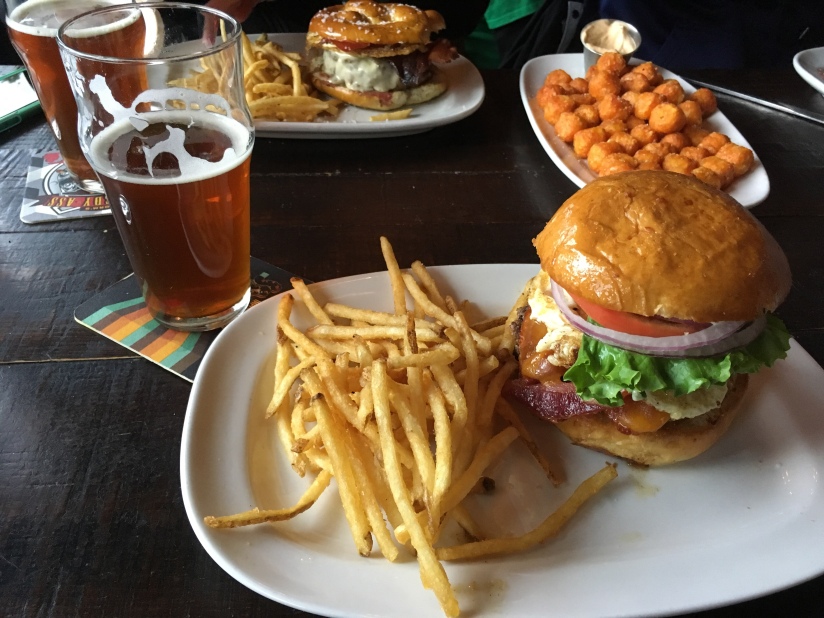 I am so very grateful to all of my supporters. First and foremost, my husband Ken – he has always been my biggest fan, although at times he must think I’m crazy for running all of those miles at all different times of day and in all different types of weather. He and his friend Mark drove down the morning of the race to watch me finish and celebrate with me. Next, my friend Christine. She made arrangements for her dog to be taken care of and moved around all of her plans so that she could come down the morning before the race and do everything with me. Seeing her out there on the course and seeing her at the finish was so amazing. And having her drive me home after the race was a HUGE blessing! And of course Paula. We’ve been through a lot together over the years. She was there for my first marathon and I am so glad that she was there for this one. She ran the international half marathon and got a PR. I am so freaking proud of her! Me, her and Christine had so much fun this race weekend. Lastly – EVERYONE else. My friends, family and followers who cheered me on in person or via text or Facebook. Every little comment and cheer meant so much to me.

So now what? After the marathon there’s always this feeling of let down. After all, there are months and months of training and anticipation going into it, and then all of a sudden it seems it is over. I am honestly still processing all of it. I am still in disbelief that I did what I did. But that doesn’t mean I haven’t thought of the future. My next focus will be the half marathon. I have two coming up – one in March and one in April. My goal is for one of those to be a 2:30 or less. So training will start back up in a little while, but for now I’m going to take somewhat of a break. Don’t get me wrong – I’ll still be running! But I’m going to focus on more cross training, building strength, and getting lean. I will definitely be running another marathon – in fact I’m already signed up to run Grandma’s Marathon in June. As for Detroit, I’d love to come back in 2019, so stay tuned…

Thanks for hanging in there and reading my recap to the very end! I hope that you enjoyed hearing about the journey and I hope that I continue to inspire others to reach their goals the way that runners I follow have inspired me.

Another birthday weekend with this girl in the books! It wouldn’t be a Lily & Robin adventure if there wasn’t a run involved. Today we ran 5 miles together, and then Paula hopped on our old trusty Huffy bike while I ran 5 more. The weather was awesome and the company was too!
It’s the last day of the month! A new month with new challenges starts tomorrow. Today I’m celebrating my July accomplishments!
I enjoyed one of my favorite meals for my birthday eve dinner with my two favorite guys!
I did my strength workout this morning… pouring sweat 😅
This was what I was thinking as sweat was dripping off my face during my workout this morning. In order to get what I’m wishing for - Garmin badges, a successful marathon, improved strength and flexibility - I gotta put in the work!!
After those 8 miles, our stomachs were growling! So we tried out the new brunch place near Paula’s house… SO GOOD! It was a quick visit but a great one. Nothing beats running, chatting and eating with my BFF. 👯‍♀️
Me: “Hey, wanna run 8 miles in 90% humidity and a good chance of rain?”
My mom knew how to be both the shining light and to reflect the light of others. I keep thinking I’ll wake up and this will all be a dream. I’m not strong… I’m surviving… some days it seems simple and others it seems impossible. Memories and moments of emptiness hit me like a gale force wind so many times during my vacation. I see her in my reflection, I hear her in my laugh, and I both love and hate it. I read that the only cure for grief is to grieve… but if grieving never ends, grief must be incurable. I miss you mom, thank you for your guiding light. ❤️
Some of the delicious food and drinks I enjoyed on vacation! When I go on trips, I plan what food I want to get as much as I plan on what experiences I want to have. This trip did not disappoint in any of these areas!