I had originally planned on running a different race this past weekend – the Patriot’s Race in my hometown of Troy through the cemetery where my grandparents are buried. It had also been planned to be my 50th race, but running the Elsie Dairy Dash and getting my sub 30 5k changed that. Recent life events and changes in plans all around had altered my training somewhat, and by the end of this past week I still needed to do 6 miles in addition to my 18 mile long run. Originally I had considered doing 2 miles and 4 miles, running Friday, Saturday and Sunday. I had also thought about going to cheer my friends on that were running the Run for Your Heart race anyway, since it is a local race and I knew so many people participating. When I realized that the race had a 10k, I thought, hmmm… I wonder how much same day registration is… that would be my 6 miles. It was only $30, a $5 increase from pre-registration prices, so at the last minute I decided I would run the race!

Even though I told myself that this was just going to be a training run and that I wasn’t looking to break any records, I was still nervous for the race. I didn’t sleep well the night before, kept waking up hour after hour like I was afraid of oversleeping. The morning of the race I was still so all over the place that I completely forgot to eat! I threw a Gu in with my racing stuff so that I could have it just before race time. I hit the ATM to grab cash for my race registration and hoped that the way I was taking would not be shut down for the race. Unfortunately, it was, and even more unfortunately I did not realize the road was closed until I tried to turn onto it, right into the sign! I pulled some crazy ninja moves, in front of some very understanding police officers, and finally figured out my way to the race.

When I arrived I met up with my friend Staci and showed her my office (the race was held at my work!) before we met up with the rest of our friends. Being a local race, many of our local running group members were there, running different races – Staci and Joyce were running the 5k with their training team from the YMCA as well as some others from the group running that race, myself and a handful of others were running the 10k, and a great chunk were going all out for the half marathon. The race started with a memorial balloon release for those affected by heart disease and then it was time for the 10k to start. My friend Christine found me – she yelled “HAMMIS!” which cracked me up because very few people call me by my last name, and I absolutely love it when they do! She is a heck of a lot faster than me, but stuck with me for the first quarter mile to take it easy. Then she was off!

The 10k follows a very similar route to the St. Mary’s Bee Healthy for Life 10k, but a lot more people run this race – thank goodness! I ran the St. Mary’s 10k in 2016 and feared I would be the very last finisher for the 10k, but somehow I did not finish last. The biggest difference between this Saturday’s race and Bee Healthy is that the Run for Your Heart race goes through the Children’s Zoo in Saginaw. You hit your first mile just before entering the zoo, and the first animals there to greet us were two very happy looking horses, probably wondering what the heck these humans were doing on a Saturday morning running through their home?! My watch beeped for my first mile and I saw a time of 10:30! Holy moly, I was running fast. I told myself I could slow down because 1) I didn’t need to PR, this was a training run and 2) even if I slowed down I could probably still get a PR! The zoo route is a bit of a maze feeling, and just as I was winding my way out I saw some speedsters running past and realized they must be the leaders of the half marathon! Once we were out of the zoo it was less claustrophobic and I stuck to the right so that the half marathon runners could pass on our left.

After the zoo, the course takes you up a bit of an incline towards Ojibway Island. This is where the 5k and 10k route breaks off from the half. I hit my second mile on the island in 11:12. A big slow down, typical mile 2 breakdown for this girl. The rest of the race is just like Bee Healthy, where we run around part of Ojibway Island and then head down the river trail past the YMCA. I hit mile 3 in 10:42 – nice recovery on my pace! Sometime around this marker I saw the lead runner, a friend of mine! Steven was blazing the trail and I cheered for him as he sped by.

I saw more and more familiar faces as I continued down the river trail. There are a few hills here and there, but nothing horrible. I cheered for Christine when she passed me by. You hit mile 4 just before you turn around to go back, and my pace slowed a bit to 10:52. STILL. I was keeping under 11 minute miles, something that I have rarely done in races! Especially not while training for a marathon! After the turnaround, I saw my friend Linda, who was kicking butt and taking names.

I am sure many other runners out there do this… pick out a person and try to stick with them. On the way out, I had picked out two guys to follow. I said, “As long as I keep them in my sights, I’m good.” Well, I passed them. There were a few more runners I picked out as I continued on my way back to Ojibway and the finish, and again, I passed them. I hit mile 5 with the same pace – 10:52, and thought, heck, I’m going to get a PR! And that’s when it got interesting. When I got back onto Ojibway, I saw the 5k runners… well, the 5k walkers. And I thought, crap. I’m going to have to compete with them for the path to get to the finish! This pushed my pace even harder, as I politely yelled “On your left! 10k runner on your left!” as I approached walkers and passed them. Some were nice enough to move over, others did not hear me and I had to cut out onto the grass. All I was thinking was… PLEASE don’t let me get hurt. Please – no twisted ankles from running in the grass, no tripping over roots, no pummeling into other walkers and runners! And this pushed me. I hit the mile 6 marker with a pace of 10:14!

When I finally saw the 3 mile marker for the 5k and knew I only had a tenth of a mile to go, heard the music and crowds, it was go time. I pushed and flew past the 5k walkers that were making their way to the finish. I passed a few 10k runners, too, and heard my friends who had already finished cheering for me. I saw the race clock – 1:06:XX – I had shaved 3 minutes off my unofficial training PR and 4 minutes off my race PR! I was not expecting the performance I had, but I was absolutely thrilled with how I did! Then I got my medal and realized that it was the 10th anniversary of the race, and I was even happier that I had made the last minute decision to run this race.

I grabbed some post race snacks with my friends and we all hung around for a while to cheer on those who were finishing up the half. I saw runners from my local group and from our state wide group, Michigan Runners, busting it out for the finish. It was awesome to play a little bit of “Race Mom” cheering for everyone, taking pictures and videos, and even running in our friend Rebecca as she finished her half in under 3 hours like she had hoped for! That girl has been through the ringer with her training and we were so very proud of her accomplishment that day!

Even though it was just supposed to be a training run – I am so proud of my performance at this race. Next year I am not planning on running any marathons, and I hope to make this race one of the half marathons that I do. From what I have heard, the course is really interesting, going through downtown Saginaw. It is a great race for a great cause in the city that I have grown to love and call home! 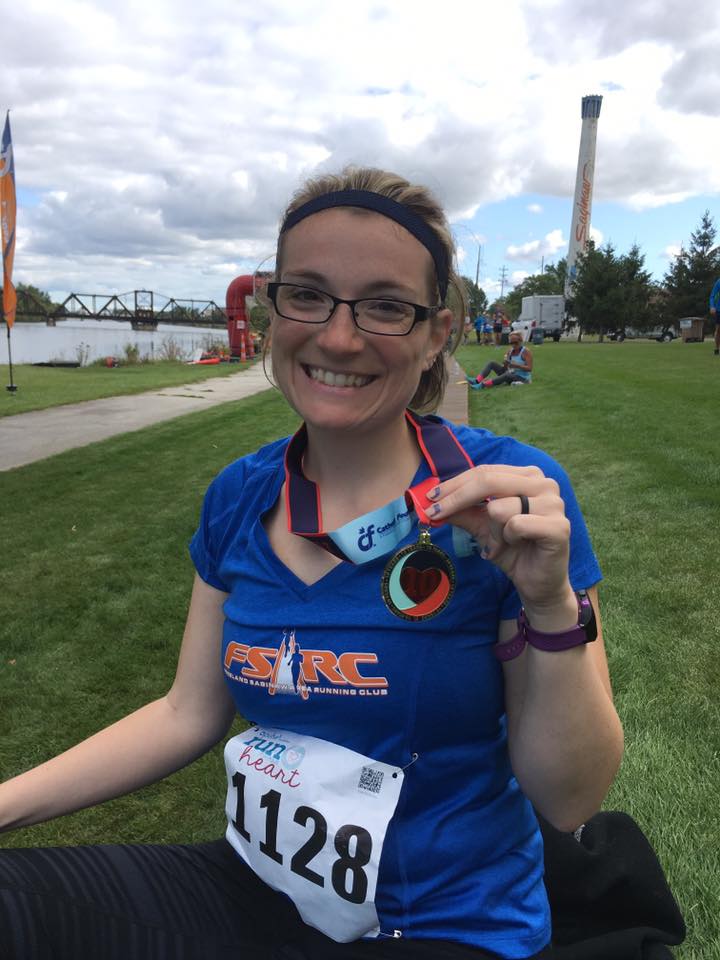