“It’ll be fun!” she said.  “Just a few little hills!” she said.  Those were the thoughts going through my head as I climbed the first “little hill” in the 2015 Winterlaufe race and saw rolling hills ahead of me.  More than just a few.  And not little! 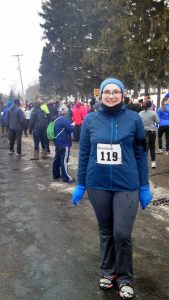 As you might recall, one of my goals for the year is to compete in a race every month in 2015.  I wanted to complete the Winter Warriors race series, but the IceCube falls on a day when I have dismissal at church for RCIA.  So I had to find another race to run in February.  The Winterlaufe is an 8k race close to where I live.  I had avoided the race in the past because 1) until last year I had never run further than a 5k and 2) I was nervous that it would be a lot of people and that would freak me out.  Well, last year I got over the long race thing – I ran a 10k in March of 2014.  And I fell in love with longer distance running.  That was my first and last 10k.  The rest of 2014 I only participated in a few more 5k races and my training really slumped.  As for it being a big race… yes, it was one of the bigger races that I have run, but it wasn’t anymore overwhelming than any other race I’ve been in.  Plus, I’m really slow, so towards the end of the race I wasn’t surrounded by a whole lot of people anyway.  So I did it, and I am so glad that I did!

As I said in my intro, the course was hilly.  Really hilly.  It wasn’t horribly snowy or icy, which was nice, but there was a section in the trails where it was icy and slushy, so I was glad I had my YakTrax.  Well… sorta glad… I’m glad I didn’t fall on my butt, but my toes are KILLING ME from the tightness that the YakTrax caused.  As I charged up the first hill and saw the rest of the hills I thought to myself… “Okay… it’s okay if you can’t run the whole thing.  You haven’t run further than 3 miles in a long time, you didn’t run your whole 10k, your toes are hurting you, you haven’t been training a lot…” and then I thought to myself… “SHUT UP AND JUST KEEP GOING!!  In fact… when you get to these hills… RUN HARDER!!!  You know it is easier if you push up the hills!!!”  And even though that first voice was still in the back of my mind, saying “It’s okay if you have to stop, this is a really hilly course…” I just kept pushing through.  Each hill I made it over without feeling like I was going to die increased my adrenaline.

I didn’t pay much attention to my time… though when I finally reached the turnaround, I did check my phone to see how far I had gone and saw that I had already put in 2.55 miles so I knew already that the course was long.  About 1/3 of the way through the race, there was a water station set up that had water and Gatorade.  When I passed it on my way back I slowed to a walk to grab a Gatorade.  I took a gulp and started running again.  Then slowed down to a walk to drink more.  Picked up my pace, ran up a hill, slowed back down to a walk to finish the Gatorade, then ran the rest of the way.  I probably walked for a minute or less.

When I saw the cute little buildings of downtown Frankenmuth coming into view, I thought, “Wow… I really did this!  And I really don’t feel too bad!  I mean… I can’t wait to stop… but I don’t feel like I’m going to die!”  As I ran down the path to the finish line, I could see my husband waiting for me.  I waved at him, made a silly face, and pushed hard to the finish.  As I crossed the finish line I saw my friend that I used to work with and gave her a huge hug.  She was the one who told me about there being “a few little hills” and razzed her.  She said she didn’t want to psych me out, and I agreed, I would have been freaked out if she had told me how hilly the course was!  We waited for her friend to finish (he walked the course due to an injury) and then grabbed some post race refreshments.

Although overall I wasn’t super impressed with my time (Endomondo put me at 5.19 miles in 1:07:59, a pace of 13:06/mile, my official results were 1:07:40, a pace of 13:36/mile), I was really impressed with the fact that I kept myself going and maintained a relatively even pace the entire race.  Even though I stopped to walk, it wasn’t for very long, and I ran further than I ever have before.  That is a huge accomplishment and it makes me so excited to run my next race… the MudDogs 10k in March!!!

Alcohol Awareness Month was developed in order to increase awareness and understanding of the causes and treatment of one of our nation’s top public health problems: alcoholism. Established in 1987, alcohol awareness month allows communities to focus on spreading awareness and reducing the stigma associated with alcohol addiction. Observance of this awareness campaign also highlights the need for education on the dangers of unsafe alcohol consumptions.
My mom loved Dairy Queen, especially peanut buster parfaits. When I was little, I would ask for a peanut buster parfait without peanuts. They would say, “So you want a hot fudge sundae?” And I would adamantly say no, that’s not the same thing, and my mom would make sure I got what I asked for... to be like her, just not as nutty. Well, now I embrace the nuttiness.
Today was my first run since Thursday. I’m glad I got to share it with my dad, my hubby, brother-in-love and my brother’s dogs. We caught my nephew on his way out to run on his own. It has been a very difficult few days, but I’m so thankful to be able to be with my family.
*NEW BLOG POST!* It has been a minute! My February training recap is on the blog. Click the link in my Instagram bio or check for the post to my Facebook page.
My friend sent me this text yesterday and my heart swelled - I had just been thinking, “Why do I post my food & workouts to my social media? Do people really care?”
I am not a fan of hot weather running. (For me, hot is anything over 60°F!) But the tough runs are the ones that make us stronger.
Today (April 7, 2021) is #worldhealthday
Meal prepping for the week!!
Today’s weather deserved one of my jumping pics! 🙌🏻