This weekend I did two things I had never done before: ran as part of a relay team and ran a race in a tutu.

The Capital City River Run was not really on my radar this year, since I had already planned to run a half marathon at Run For Your Heart and I didn’t really care to go to Lansing for a 5k. Then when they started putting out teasers about the race swag for it being the 25th running, I was feeling the FOMO. I saw that the medal for the half marathon relay was pretty darn close to as awesome as the one for the half marathon, so I asked my friend Jenny if she would do the relay with me and my hubby. She said yes, and then it was time to get creative! Ken came up with the team name of Beauties and the Beast and Jenny got to work on costumes.

We met for the start in our awesome gear – Jenny made Ken a shirt to look like the Beast’s tuxedo, I had a yellow tutu and tank with embellishments to look like Belle’s yellow dress, and Jenny wore a blue tank and skirt with apron to look like Provincial Belle. I said goodbye as Jenny and Ken boarded the bus to take them to their relay exchange spots. My friend Joyce and I made our way to the start line. I got to meet my friend Tina for the first time in person and gave her a big hug! She was pacing the 13:00 minute/mile group for the half marathon. She wished me luck as the race began.

My leg was supposed to be 4.3 miles. It was the leg that went from Lansing to East Lansing and onto campus. I got to run past Sparty and do a little running on the river trail. Jenny and I had talked about the “what ifs” – “What if we get a sub 2:30 half as a team? What if we get a better time than my PR as a team?” – and I had that stuck in my head. I knew that Ken wouldn’t be pulling off his best times since he hasn’t run since early July, but wondered if Jenny and I would be able to make up for it. I started off at an 11:02 pace and challenged myself to maintain negative splits the whole time.

I got so many cheers and compliments while running the race. I understand how Jenny feels now whenever she wears her tutus or costumes to races – it’s really motivating to hear people commenting on your costumes and the fact that not only do you look cute, but you’re running well, too! I caught up to a guy that always runs local races with us and said hello. He ended up taking a picture with me and said he couldn’t keep up with my pace. I told him not to worry, that I was only doing the relay, so I didn’t have to maintain my pace for another 10 miles!

Unfortunately the tracking app we were using wasn’t working very well for my teammates. I texted my husband when I was at mile 3 to let him know I was getting close to the exchange. He was running the second leg of the race. My watch hit the 4.3 mark and the exchange was nowhere to be found. I figured there would be no way I could miss my husband and Staci at the exchange point, but I started to wonder as I hit 4.4, 4.5… finally at 4.59 miles I reached the water station and saw Staci and Ken. I was expecting a timing pad and a chute to run through, but there wasn’t one. I took Ken’s backpack from him and he was off. Not long after I got there, Joyce arrived and Staci took off. Joyce and I took the bus back to the start line to get our medals, snacks and wait for the rest of our team to arrive. 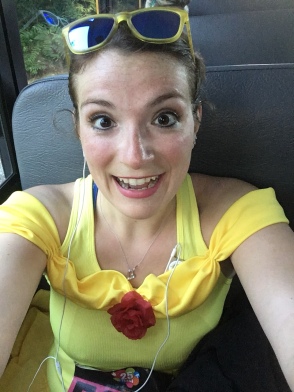 It was really fun being at the finish line to watch the faster runners finish. I got to see a lot of friends I hadn’t seen in a long time. Ken and Staci found us when they got back from their leg of the race and we all waited together for Jenny and Linda to wrap up the final leg. At 2:32, Jenny came running down the chute into the stadium, carrying her picnic basket and reading her book! It was absolutely perfect. Linda finished not long after. 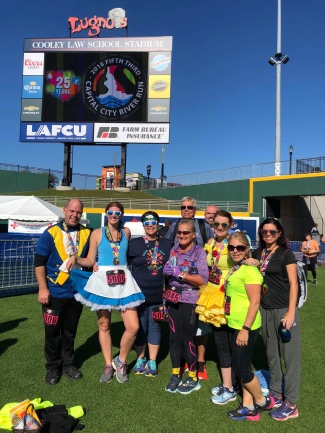 Overall it was a great day – the weather was great and so many of our friends ended up with PRs! I really loved doing the relay and I hope to do more of them in the future. It was especially fun since there were two teams so we weren’t alone waiting to start our leg or for others to finish. I saw a lot of friends that I had not seen in a while. After the race we joined my sister, brother-in-law and nephew for lunch at Green Dot Stables. It was great to catch up with them and talk about races in the near future. 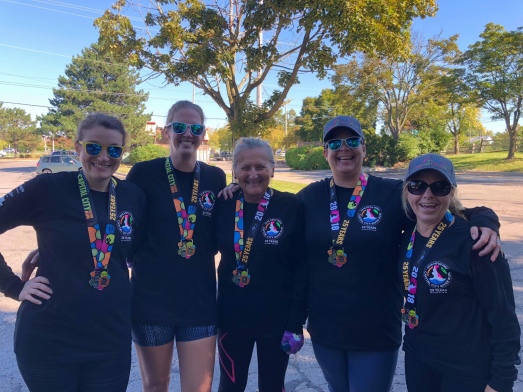 And it was so much fun running in a tutu! :)

Trigger warning: alcohol/substance use
You bet your butt I’m starting my first day back to work with a delicious cinnamon roll made with love by one of my dearest friends. ❤️
A two mile run in my favorite place with a couple of my favorite dudes. ☺️
Alcohol Awareness Month was developed in order to increase awareness and understanding of the causes and treatment of one of our nation’s top public health problems: alcoholism. Established in 1987, alcohol awareness month allows communities to focus on spreading awareness and reducing the stigma associated with alcohol addiction. Observance of this awareness campaign also highlights the need for education on the dangers of unsafe alcohol consumptions.
My mom loved Dairy Queen, especially peanut buster parfaits. When I was little, I would ask for a peanut buster parfait without peanuts. They would say, “So you want a hot fudge sundae?” And I would adamantly say no, that’s not the same thing, and my mom would make sure I got what I asked for... to be like her, just not as nutty. Well, now I embrace the nuttiness.
Today was my first run since Thursday. I’m glad I got to share it with my dad, my hubby, brother-in-love and my brother’s dogs. We caught my nephew on his way out to run on his own. It has been a very difficult few days, but I’m so thankful to be able to be with my family.
*NEW BLOG POST!* It has been a minute! My February training recap is on the blog. Click the link in my Instagram bio or check for the post to my Facebook page.
My friend sent me this text yesterday and my heart swelled - I had just been thinking, “Why do I post my food & workouts to my social media? Do people really care?”
I am not a fan of hot weather running. (For me, hot is anything over 60°F!) But the tough runs are the ones that make us stronger.