My husband Ken has been bugging me to run the “I Ran the D” 5k since its inaugural year last year. He saw signs for it when we went downtown to see The Lion King and said “We gotta do that one!” Unfortunately by the time we got around to actually trying to sign up for it last year, the race was sold out. He said “Oh well, that’s okay… but we gotta do it next year!” So when a friend of ours from our running group mentioned that he and his wife were running it again this year and that we could get a group discount by signing up for it together, we were in!!

Today was race day, and we couldn’t have asked for a more beautiful morning. How did we luck out with two weekends in a row of perfect weather for racing!? Although the start of our journey was pretty early, we enjoyed the drive to Detroit with the sunrise. We met up with Craig and Jill and headed to the race. The race was crowded, but they sent us off in waves so that helped with crowding on the course. Before the race we got a lot of photo ops, including a selfie with Paws! Of course I was wearing my shirt from my other favorite Detroit race – the Detroit Free Press/Chemical Bank Marathon. 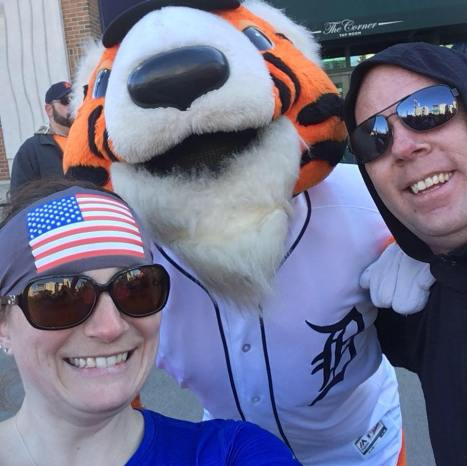 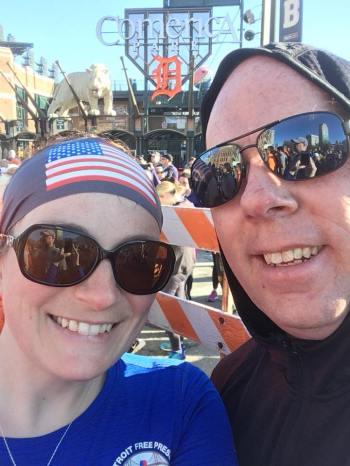 Once we were off and got out of the shadow of Comerica Park, the sun shone on us the whole race! The course was nice and flat, with lots of views of the city and plenty of entertainment along the way. This race was a comeback run for Ken. The last race he ran was the Bay City Irish Double and he has been experiencing some ankle pain ever since. He admitted after this race that he had never been so nervous to start a 5k because he was worried that he wouldn’t be able to run it. Luckily he felt great and was able to keep up with his 1 minute run and 1 minute walk intervals. A few times he asked if we could do extra walks, and I would say “How about we just jog really slow?” and he would jog instead of continuing to walk. We kept our pace pretty consistent – 12 minutes for the first mile, 11:45 for the second mile, and 12 minutes for the third mile. We ran the last tenth of a mile at a 10 minute pace – woo, go us!

Once you cross the finish line of the race, you head into Comerica Park and get to walk around the whole field in the warning track (I just found out today what a “warning track” is – it’s the gravel path around the outside of the outfield that “warns” the players that they are about to run off the field and into the wall to catch a ball! **the more you know**) before grabbing your medal on the way out. They had plenty of snacks for us provided by Kroger (water, bananas, fruit snacks and granola bars) and a photographer took a group photo of us.

The race felt great today. I won’t lie – I was a little concerned that I might be too tired with the combination of running a marathon a week ago and doing an 8 mile long run yesterday. I did some fast runs during our intervals in the race that felt easy. Ken even commented, “You’ve gotten faster!” For once I felt like HE was keeping up with ME! Had I pushed myself and gotten away from crowds, it would have been a great race to try to PR at, but I was happy running with my hubby and not pushing it. The medal and shirts that we got were really awesome (see the pictures below). Overall it was an awesome race that I definitely would like to do again!